Thriving in the Mass Fintech Community

As Mohammed Dastigir, Head of FinTech and HealthTech Partnerships, Ecosystem Development at MassMutual and Massachusetts Fintech Working Group leader says, "the founding and evolution of Posh Technologies is a great example of what we're looking to accomplish with the Mass Fintech Hub. Karan and his partner, Matt, attended school in Massachusetts and consider it home. They graduated from MIT and went through the university’s Innovation Lab which helped them found Posh. They also participated in a few leading accelerators and startup enablers including MassChallenge and the FinTech Sandbox that helped them connect with a network of different corporate partners, including MassMutual. Now they're giving back to the community by hiring top talent and solving real business challenges.”

A partnership built on a connected community

As MIT classmates, friends and fraternity brothers, Karan Kashyap and Matt McEachern shared a deep interest in AI technologies, speech and conversational bots and a desire to build their own startup together. Since they were both pursuing master’s degrees around their work in natural language processing and conversational AI, they naturally sought to tackle that space.

After spending some months in 2017 and 2018 consulting in the local community, Karan and Matt observed that large banks such as Bank of America and Capital One, along with utility companies, were the only ones really pioneering the use of conversational AI technologies in the mass market. No one was focusing on the small and mid-size financial institutions who don't have the huge budgets required to develop this kind of technology on their own.

One of the first community resources they found highly valuable was MIT's summer accelerator program, Delta V. As Karan explains, "That's where the Mass ecosystem really first came into play. We were academic founders, and we didn't have extensive professional networks. We had never worked in a bank and didn't have a rolodex of bank CEOs." The program taught these academic researchers the basics of starting a company and building revenues, but most importantly, plugged them into a range of advisor relationships with MIT alumni in the banking community.

One of these connections recommended that Karan and Matt enroll in Digital Credit Union's year-long program at the DCU Fintech Innovation Center in downtown Boston. This gave the Posh team access to DCU's executives, who were integral in validating their product and making introductions to other credit unions and banks both in Massachusetts and nationwide. They also took part in the MassChallenge Fintech Program (for which Posh won the $40,000 Gold Prize), introducing them to other fintech startups with which they were able to share experiences and learn from while strategically partnering them with MassMutual and other enterprises interested in Conversational AI.

"These programs basically seeded the network opportunity for us to get connected to the right folks who might then end up connecting us to other people." said Karan. "For example, Mohammed connected us to MassMutual's credit union, who is now a Posh customer."

Another accelerator program Posh participated in was the UFirst program, run by Boston's Underscore Venture Capital. They are strong supporters of the local ecosystem, and they supported Posh with a small investment that the team has built upon with additional investments from a number of their customers, raising approximately $4 million.

As Posh matures, finding talent to help them grow is key. Posh is now a team of 30 people with many coming from local graduate programs, particularly from Harvard and MIT. "I think Massachusetts is a really great place to hire people, because of the academic advancements that are here and the associated ties to universities," said Karan. Posh has also taken advantage of intern programs offered by Harvard Business School, Brandeis University and the State of Massachusetts.

The local ecosystem continues to provide great opportunities to help Posh grow. From access to valuable data via Fintech Sandbox (read more here) to help on how to best take advantage of PPP programs through the pandemic, Karan believes that the Massachusetts fintech community is “a tight-knit group of really ambitious people trying to transform legacy operations and archaic business practices with modern technology and business models.”

For him, Massachusetts is the best place in the world for conversational AI technology with MIT, Harvard and other research institutions as well as corporate research teams from the likes of Amazon, Microsoft, Google and Facebook, who bring great talent with them. Yet he believes that “people here are also a little bit more bootstrap, and they're a little bit scrappier. They try to get more done with less, and that's a great attitude.”

Karan is looking forward to seeing how the Mass Fintech Hub can help grow the community even more. “I think that the idea behind this program is to make the point that there is as good, if not better, infrastructure for innovation, for partnerships, for growing talent, and for everything in Massachusetts. And I think that will make everyone more successful.” 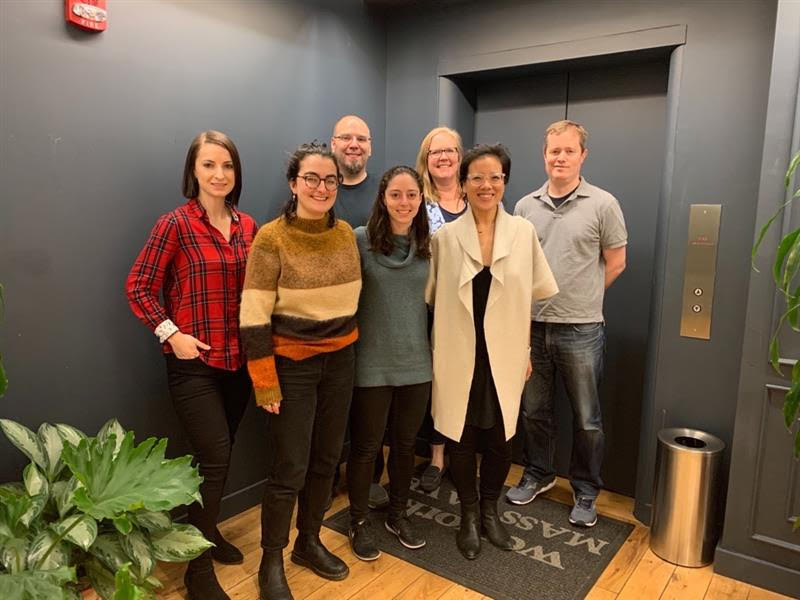 Suelin Chen and her company Cake are a true Massachusetts...